Dr. Ashok Singh took part in all the meetings.

On November 19, Dmitry Orekhov made a presentation and talks at the state regional power grid company of Rajasthan Rajya Vidyut Prasaran Nigam Limited;

Rajasthan Rajya Vidyut Prasaran Nigam Limited (RVPN) provides the pathway for power within whole of Rajasthan. RVPN also owns the shared generating projects as representative of erstwhile Rajasthan State Electricity Board. RVPN customers include electricity generators, distribution companies and open access consumers who count on RVPN to deliver power from the location of generation to inter-phase point of Discoms enabling them to supply where it's needed in the homes and businesses they serve. RVPN aim is to provide reliable electric transmission service to these customers. 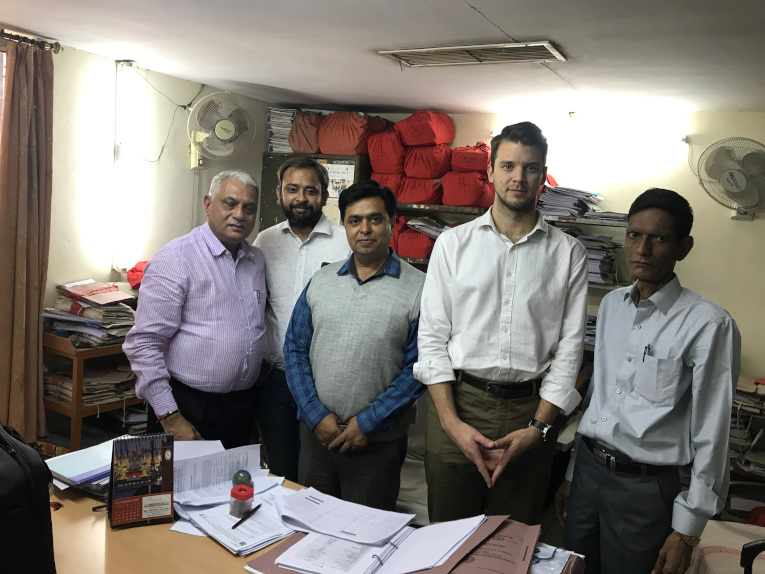 On November 20, a business meeting was held in the state power grid company Power Grid Corporation of India Limited.

Power Grid Corporation of India Limited (PowerGrid) is an India-based state company, engaged in construction, operation and maintenance of the bulk power lines network. PowerGrid is one of the largest power grid companies of the world. It is largely involved in construction and operation of power networks in India and strengthening and developing of ties with the neighboring countries: Nepal, Bhutan, Bangladesh, Sri Lanka. The company’s core business is transmission of bulk power across the states of India via 765, 400, 220, 132 kV alternating current and ±500 kV direct current power lines that together make up the inter-state transmission system (ISTS). The company has a dominating position in the national system of power transmission in India: - operates up to 90 % of inter-state and interregional power networks; - produces up to 50 % of all electric power, generated in the country; - operational availability of the power grid is over 99 %; - using a subsidiary, called POSOCO, to control the national power system. The current interregional power transmission volume of the state power system makes about 38 550 MW. The Company owns and operates transmission network of about 108,128 Ckm of Extra High Voltage (EHV) transmission lines, 185 EHVAC & High Voltage Direct Current (HVDC) Substations and 206 953 MVA transformer capacity. PowerGrid is a state-owned company with a centralized management: 57.90 % of shares are owned by the state and 42.10 % — by other investors. The central headquarter of PowerGrid is in Gurugram.

The guest was welcomed by Mr. Bhomwick and the purchasing managers.

During the meeting a discussion on technical and organizational aspects of standard testing of high-voltage Isolator bushings was held with the participation of PowerGrid specialists.

The sides updated and agreed the tests schedule.

Delhi Transco Limited (DTL) as a State Transmission Utility of Capital city of Delhi is transmitting Power from Central Sector Generating Stations as well as from Intra-State Generating Stations and making it available for Delhi DISCOMs which in turn makes it available for the citizens of Delhi at consumer end. The existing network of DTL consists of a 400 KV ring around the periphery of Delhi interlinked with the 220 KV network spread all over the city. The Indian state utility Power Grid Corporation of India Limited controls and manages Delhi Transco Limited.

The three-phase autotransformers of the substation with a capacity of 500 MVA each have Izolyator high-voltage bushings with RIP-insulation for 52, 252 and 420 kV.

The substation employees confirmed the high quality of the installed Izolyator bushings and their successful operation for more than three years.

Delhi Transco Limited sent a similar confirmation at the official level to Izolyator on October 11, 2018. 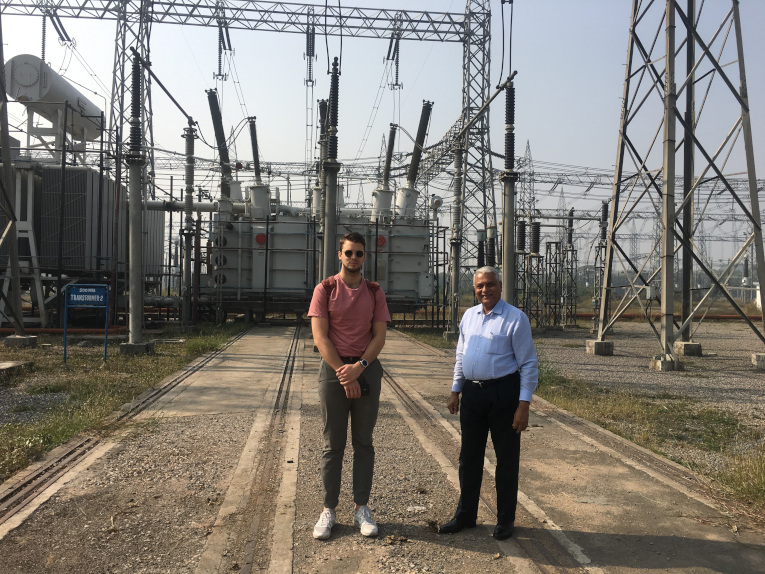 Dmitry Orekhov and Ashok Singh at the Bamnauli 400 kV substation of Delhi Transco Limited. In the background — an autotransformer with 420 and 252 kV high-voltage Izolyator bushings

The Transmission Corporation of Telangana Limited (TSTRANSCO) was founded in the result of India’s power industry reform. Initially the power company of Andhra Pradesh State APSEB, which came into existence in 1959, was responsible for generation, transmission and distribution of electricity. In 1998 under Electricity Sector Reforms agenda, the State Government promulgated APSEB division into a generating company (APGENCO), a transmission company (APTRANSCO) and four distribution companies (APDISCOMs). In 2014 APTRANSCO was divided into regional network companies: TSTRANSCO and APTRANSCO. The central headquarter of TSTRANSCO is in Hyderabad.

The main topic of the talks was the clarification of the procedure of participation of TSTRANSCO specialists in testing high-voltage Isolyator bushings, which will be installed on TTDI transformers designed to equip substations of TSTRANSCO.

TSTRANSCO and Izolyator already have successful experience of such cooperation. 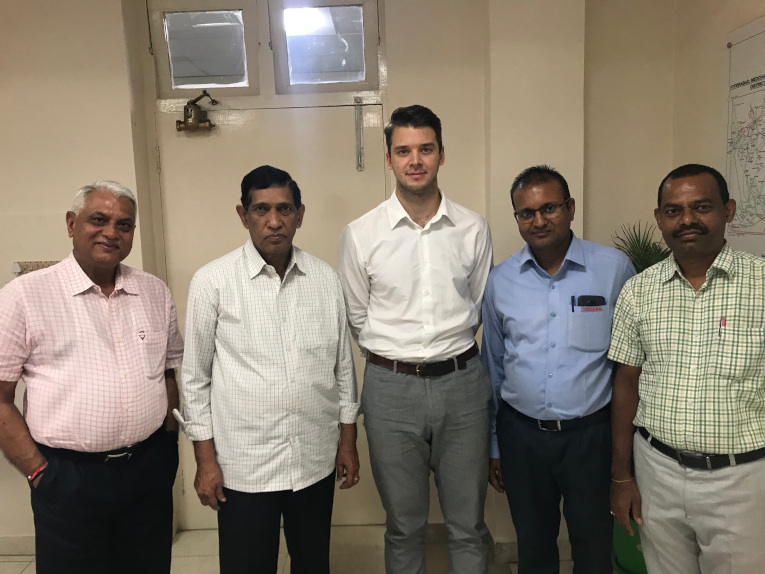 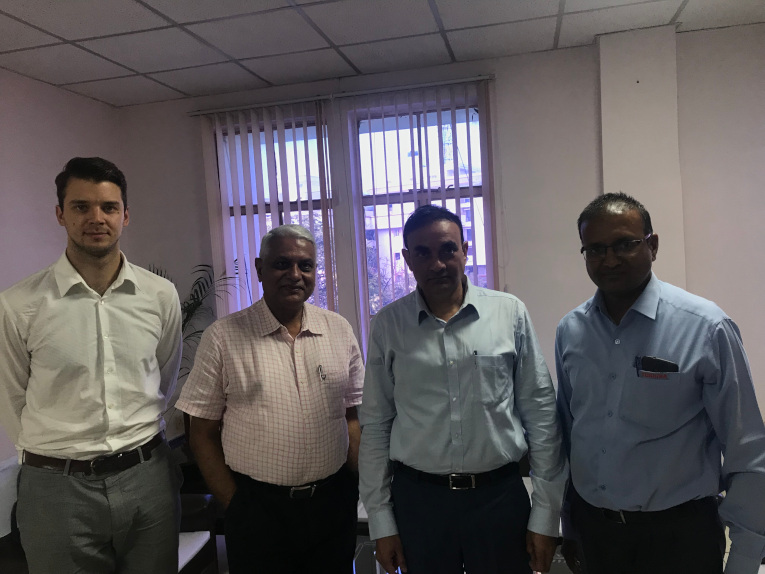 CG Power and Industrial Solutions Limited (CG) was formerly known as Crompton Greaves Limited and changed its name on February 27 2017. CG is a USD 2 billion engineering conglomerate with an impressive and diverse portfolio of products, solutions and services for Power and Industrial equipment and solutions, addressing myriad needs. Enjoying a reputation of stature for over seven decades, CG, which originates in India, has transformed itself into a global corporation. With a permanent footprint and manufacturing facilities in nine countries across Asia, Europe and North America, CG is fast emerging as a first choice supplier of high quality, ”smart” electrical, industrial and consumer products and solutions all over the world. CG is part of Avantha Group.

Guest was welcomed by Pravin Dongarwar and Mukesh Mahajan.

During the company visit, issues of practical cooperation and effective planning of joint activities were discussed.

All business trip meetings were held successfully and with a common focus on the future and long-term cooperation.

We appreciate all our Indian partners and all meeting participants for the invitation, hospitality and active cooperation for the good of India and Russia, further strengthening of Russia — India business ties and the century-long friendship between our countries.